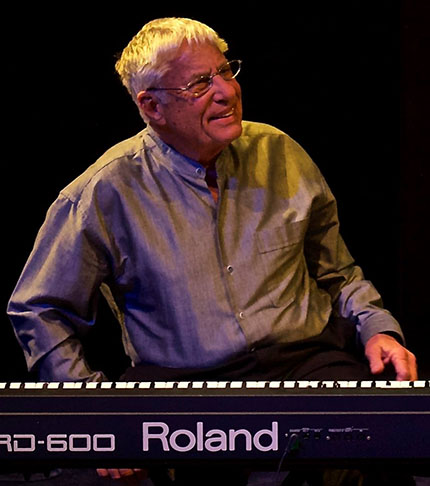 BOB ZAUN, piano, arranger || Starting at age 10, Bob had four painful years of piano lessons. In his early teens, he discovered jazz and Oscar Peterson, Count Basie, Stan Kenton, and Ella. As a freshman at Valparaiso University, he spent his spare time in a practice room, picking out songs in the key of C . During the summer, prior to his junior year, he met a bass player. One night they exchanged lessons, golf for bass. Bob was hooked. Upon returning for his junior year, Bob told his dad he’ decided to minor in music and needed a second instrument (untrue), a string bass. His dad asked, “What is your first?” Bob said, “Piano.” “Could have fooled me,” he replied. A week later, Bob had his bass. Before classes started Bob met a jazz pianist, Bill Ramp. Bob asked if he’d like to start a jazz combo. “What do you play?” Bill asked. “Bass,” Bob replied without hesitation. That afternoon they walked past a freshman dorm and heard the drum sounds of Bill Langlois and the Bob Fiasco Trio was born. They soon became the “go to” group for campus functions and a favorite in local bars! After graduation, he joined the US Air Force and served four and a half years attaining the rank of Captain, spending his last year in Taiwan. While building a 12 office real estate company for 15 years, then originating home mortgage loans for another 15 years, Bob spent his spare time devouring jazz books and studying music theory. In 1980, on piano, he formed Jazz Spectrum, an instrumental quartet. In 1994, he organized the vocal quartet, retaining the name, Jazz Spectrum. He has studied vocal arranging with internationally known Michelle Weir and big band arranging with Chris Madsen, director of jazz studies at the University of Illinois, Chicago. Bob is married with two children. He retired as a regional manager for Chase Home Mortgage in 2000 and is a volunteer in Mundelein High School’s jazz program. He writes all of Jazz Spectrum’s arrangements. In 2016 he was elected into Taft High School’s Hall of Fame in Chicago. 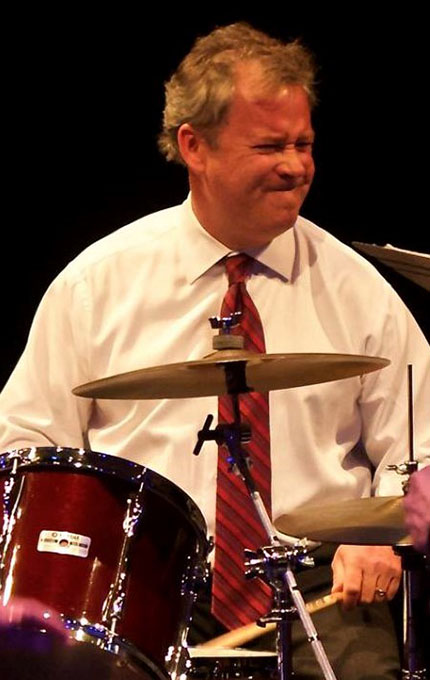 JOHN EIFERT, drums || While in high school, John played in several groups at Marriot’s Great America, including the pit orchestra in the grand music hall, the Dixieland jazz band, a top 40’s band and the trombone jazz ensemble called “Bones.”  After studying percussion performance, he graduated from the University of Illinois with a degree in music education.  However, he chose to pursue a career in corporate America, where he has worked 32 years for the same company in the field of mortgage banking. In addition to Jazz Spectrum, he has performed with several local jazz groups, including the 10 oz. Martinis. John teaches privately and works with various school groups.  He is Jazz Spectrum’s lead voice in the recently-formed male quartet dedicated to singing Four Freshmen arrangements. He and Stacy have raised two outstanding musicians who both perform regularly. 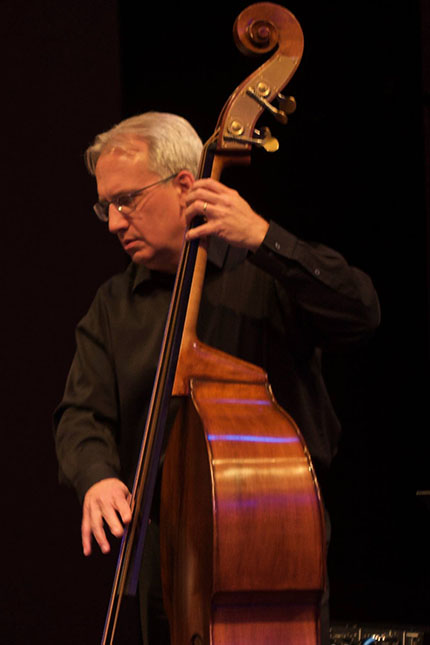 BILL ZIELINSKI, bass || While recording their 2004 CD, “It’s Christmas,” Jazz Spectrum needed an acoustic bass on one tune. Bill was recommended. Shortly thereafter, when their long-time bass player, Tom Sievers, retired, Bill joined the group and has happily been a part of “the family” ever since.

Starting at the age of eleven, Bill played bass in his middle school, high school and University of Illinois jazz bands. At fourteen he began playing professionally. Bill continues to free-lance, playing weddings, musicals, and a variety of gigs with small jazz groups and big bands. He plays local summer festivals with a “classic rock with horns” band, and, for over a decade, with a band creating an eclectic blend of blues, jazz, soul and funk.

Bill graduated from the University of Illinois with a degree in computer science. When not playing music, he develops computer software products. His past projects include computer games, arcade games, Nintendo games, Disney theme park attractions, entertainment systems for restaurants and bars, and video streaming services for commercial airlines.

Bill lives in an old house, according to Bill, in Palatine, a suburb northwest of Chicago with Jennifer, who, as a volunteer roadie, has helped carry his equipment ever since those high school’s band trips. Their son Mitchell has musical and technical talents of his own, lives near Washington D. C. and does work for NASA with satellites. 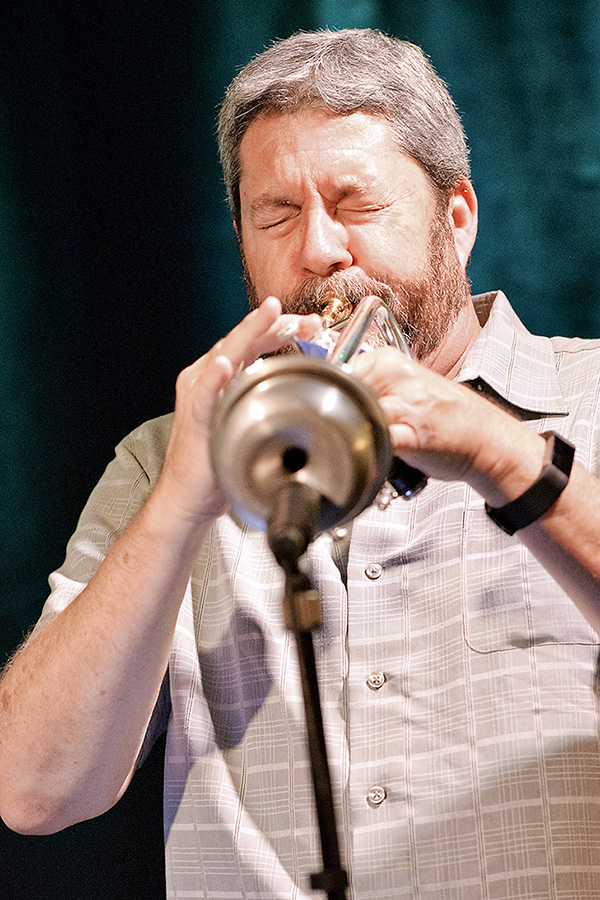 DAVID KATZ, trumpet || Dave attended Northern Illinois University, obtained a bachelor’s degree in music education and played in the NIU Jazz Ensemble for five years under the direction of the legendary, Ron Modell. The NIU band toured with jazz greats Louie Bellson, Dizzie Gillespie, Marvin Stamm, Don Menza, Frank Rosolino, Lou Marini and Arnie Lawrence. After graduating, Dave did a short stint with the Woody Herman Big Band and a tour of England and Ireland with the Louie Bellson Big Band. He also performed in Poland with the Chicago band, Orchestra 33. In 2017, Dave was a guest artist at the Klaipeda Castle Jazz Festival, Klaipeda, Lithuania.

You didn’t see him, but you have heard is trumpet on radio and TV commercials for Michelob, Budwieiser, State Farm, McDonalds and Kraft to name a few. He recently performed on a live Christmas show for the cable TV channel, TLN. Dave is in great demand as a freelance artist in the Chicago music scene. In addition, he performs with the Jazz Consortium Big Band, Orchestra 33, The Pete Ellman Big Band, The Vern Spevak Big Band and now….JAZZ SPECTRUM. 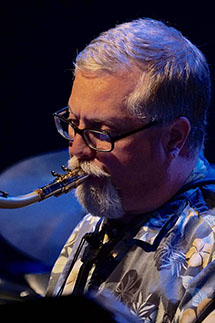 DAVE KUBLANK, saxes and flute || David started playing saxophone in 1973 under the direction of his dad, now a retired band director. He attended Northern Illinois University, achieving a Bachelors Degree in Performance. He performed in the award-winning ensembles, NIU Jazz Ensemble, Wind Ensemble and Saxophone Quartet. Dave performed at Disneyland in 1988 and was called “The Chicago Flash” by jazz Euphonium great, Rich Matteson (RIP) because of his Chicago Jazz sound. His style, rooted in the “cool” and “bebop” eras, has been influenced by Stan Getz, “Cannonball” Adderly and Eddie “Lockjaw” Davis, among others. Being one of the “first call” freelance musicians in Chicago, Dave has performed with such notables as Maynard Ferguson, Louie Bellson, Conte Condoli, Kurt Elling, Freida Lee, Randy Brecker and Pete Christlieb, to name just a few. Dave also has hidden vocal talents. He is an outstanding scatter and is singing the third part with our new male quartet. He lives in Lindenhurst, Illinois, is married and has two children. 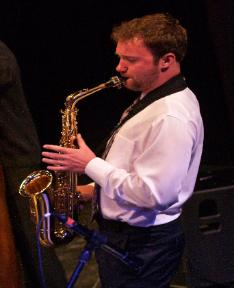 RYAN EIFERT, saxes || Ryan proudly carries the torch as the third generation of a musical family. Hi dod, John, is Jazz Spectrum’s drummer, his mom, Stacy, is Jazz Spectrum’s alto singer, and grandfather, Bob, is its founder and pianist. Ryan has been sitting in with Jazz Spectrum since he was 11 years old. He became a full time member after graduating from the University of Illinois, increasing the horn section to three. Shortly after graduation, with a degree in finance, he obtained a position as a banker with PNC Financial Group. Like his dad, he claims he is a businessman by day and a musician by night. During college, he worked for non-profit businesses, their causes ranging from collecting and distributing children’s books to teaching entrepreneurship in Tanzania. These interests have led him to studies in Italy and travels in Europe, Asia and Africa.

Ryan played saxophone throughout middle school, high school and college. He was a member of Midwest Young Artists, was featured with the Illinois Music Education Association and performed with the University of Illinois jazz bands. In addition to performing with Jazz Spectrum, Ryan plays keyboards with a funky band, Fern! The Funk Sensation 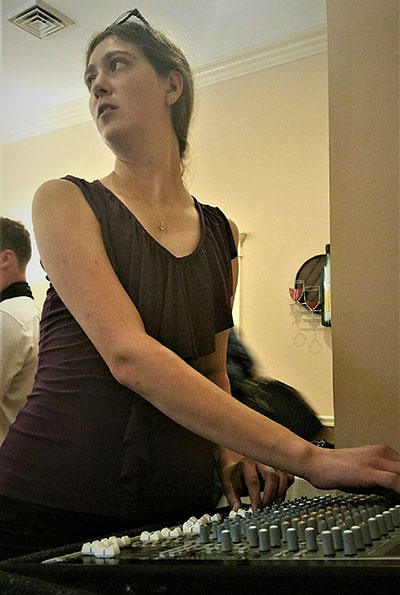 DANIELLE von HELMS, sound engineer || Danielle was introduced to Jazz Spectrum by an old grade school friend. She volunteered to manage their sound system at a gig in Mundelein, Illinois. Soon thereafter, she was asked to be their sound technician. Dani is an Illinois Wesleyan graduate (2017) with BA in Management and minor in Theater Technologies.  She orchestrated the sound design for numerous shows, ran the recording studio and served as sound engineer for multiple jazz festivals and concerts. She also worked as a production assistant and stage hand at the Bloomington Center For Performing Arts. When not performing as Jazz Spectrum’s sound engineer, Danielle is on the road most of the time as a lead installer for SKC Communications.

She directs the installation of video conferencing and audio-visual systems for government, corporate and educational facilities throughout the United States.  After instillation of the new equipment, she fabricates their equipment racks and trains personnel in the operation of their new system.

In her free time, she serves as a stage hand at Alpine Valley Musical Theater where she has worked with Jimmy Buffett, Dave Mathews Band, The Who, and, at Lambeau Field, Billy Joel. 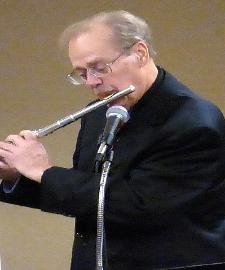 LARRY BOISEN EMERITUS MUSICIAN WITH JAZZ SPECTRUM
Larry moved and retired from playing full time with Jazz Spectrum in 2017 after 13 years of service. We will miss his playing but we still benefit from his creative writing. Here is his biography.

LARRY BOISEN, saxes, flute, clarinet, harmonica, oboe We met Larry in 2001 when he was in the audience at a Jazz Spectrum concert. He became a permanent member of Jazz Spectrum in 2004. Larry and Bob have collaborated on various projects including writing a commercial for WRLR-FM which Jazz Spectrum recorded. Larry has backed numerous popular performers such as Joey Lewis, Jerry Vale, The Harmonicats, and Leslie Uggums. He has toured with Les and Larry Elgart, Ralph Marterie and Ralph Flanagan. He is a playwright, composer, lyricist, author and poet, plus he is fluent in 9 languages. He composed the title tune for Jazz Spectrum’s CD, It’s Christmas. Larry graduated from Northeastern University with a major in English and French. Prior to retiring after 30 years with the US Post Office, he served 3 years in the US Army and taught English and the Arts in the inner city of Chicago. See: his web site: www.recitalmusicplus.com