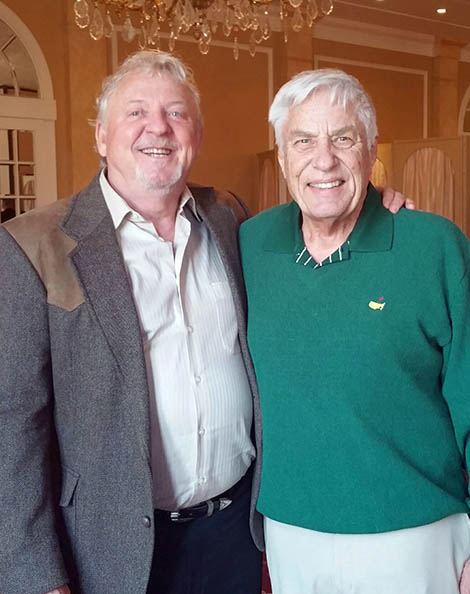 Bob with Jim Jacobs, the original Greaser. Together with Warren Casey, Jim wrote the most performed musical of all time, “Grease.”

On September 18, 2016, Bob Zaun was inducted into William Howard Taft High School’s Hall of Fame (’58). This is the “second class” of this newly formed distinction. Voting was open to all alumni and retired teachers. He joins such notable Taft alumni as Jim Jacobs (’60), creator of the musical Grease, Jim Grabowski, (’62) U of I College Hall of Fame running back and stand out player for the Packers and the Bears, Lynn (Martin) Morley (’57), Secretary of Labor under George H. Bush, Larry Marsh (’59), Admiral, USN, Donna Mills (Donna Miller ’58), famous actress.

Bob was elected because he captained Taft’s undefeated golf team to two Chicago City championships in 1956 and 1957. Also cited were his accomplishments in real estate, mortgage banking and music education.  During the 1970’s he built a 12 office company in Chicago’s Northwest suburbs.  When the newly established Harper College expanded their business department to include a major in real estate, Bob was tapped to write and teach Real Estate Marketing and Brokerage, a two level, three credit course, approved by the state. In the mid 1980’s he joined Margaretten, a mortgage banking firm based in New Jersey. Within a few years, he became a regional manager and Vice President.  After 15 years, three mergers and buyouts, he retired as a  regional manager with Chase Home Mortgage.

While jazz music has been a hobby, it also is his passion.  Since retiring, he has been a volunteer in Mundelein High School’s music Department, coaching students in improvisation and music theory.  He founded Jazz Spectrum and his vocal and big band arrangements have received many accolades from musicians and jazz educators alike.